Here is the blog from 18 July. The day started at the YWCA, we woke up and went down for breakfast- the options were egg, toast, jam or curry before packing our bags and heading off in the Amala school bus around  10am. The journey was extremely long but we saw 4 people climb onto one motorcycle, some monkeys in a tree and sacred cows every mile or so. We got to see different parts of the country itself: the busy city of Chennai, the slums nearby, the hectic motorway and the quiet villages before finally reaching the Amala Children’s Home around 4pm. We were greeted by all the school children lined up clapping and waving, as we stepped off the bus we were met with Jasmine and Rose garlands being placed around out necks. Then we went down the lines and shook each and every child’s hand and some of the senior staff too, afterwards we were met by Raja who told us to go and settle in. 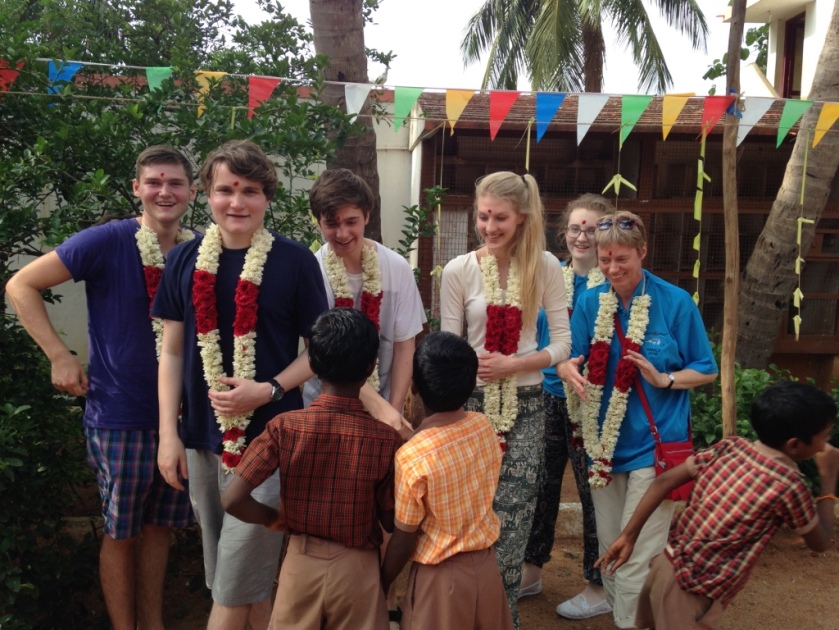 After we had unpacked we went outside for a wander, joining Ms J and Brett we walked over to the playground of the school. However before we could even get there a torrent of children came and grabbed us before claiming us as ‘theirs’, the girls all stood in a circle and played splat and sang some Indian songs. The boys on the other hand were dragged around a field seeing who could sprint the fastest or kick the ball the highest, before we were all told that the children had to go for study time. During their study time we sat outside and talked in the heat, at 8 pm we went inside for out dinner- traditional noodle soup followed by rice and curry or potato mush with popadoms and a variety of spicy sauces. Once we had finished our meal with some fresh mango from the trees outside we were once again met by the children  wanted to play, more dancing and singing followed until it was their bedtime. We all sat outside the home until we realised something was missing, turned out Elliot had been dragged to go sit with the boys for 15 minutes of quiet time, which mainly involved them being fascinated by Elliot’s skin turning red after they poked it. Once he had joined us again we were rushed inside by the rain brewing. The night ended in an amazing thunderstorm with monster streaks of lightening, a good first day in Amala.